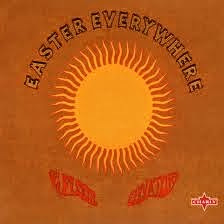 Given the title of this album by Austin's psychedelic rock band The 13th Floor Elevators this post should probably have featured last week -so apologies.
A few years ago I got an unwanted Christmas present namely The Division Bell by Pink Floyd. So I did what any sensible person would do and took it to Echo in Byres Road where I exchanged it for the 1967 masterpiece that is Easter Everywhere by the 13th Floor Elevators. I got a socket set from the same person the following year which was equally useless!
If you didn't know this was from 1967 I'm pretty sure that if you took an educated guess that you wouldn't be far away.
I think it is reasonable to assume that industrial quantities of drugs were consumed during the production of this album.
Certainly drugs ultimately played a part in the demise of the band. That and Roky Erickson's psychiatric problems which were probably drug induced in part
Thankfully, Roky is now out of institutional care and is making music again.

As Ray Wylie Hubbard sings on "Screw You, We're from Texas " " no band was cooler that the 13th Floor Elevators"
Another post inspired by the excellent Psychoraag.

The 13th Floor Elevators - Slip Inside This House