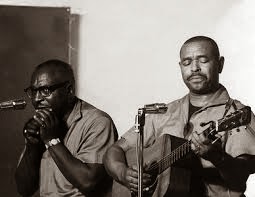 From The Beginner's Guide to American Roots - "The blind harmonica player Sonny Terry and the guitarist Brownie McGhee  began their  long working relationship in 1942. They never liked each other much and bickered even on stage. But musically they were perfectly matched and their partneship endured until the mid 1970's"
Pretty much says it all really
Saunders Terrell (1911 -1986) aka Sonny Terry and Walter Brown McGhee (1915 -1996)  aka Brownie McGhee first met when working with Blind Boy Fuller.
I have a vague motion of seeing some black and white footage in a documentary of them playing in somewhere like Halifax or Huddersfield in the 1960s.
And  er that's about it.

Sonny Terry & Brownie McGhee - Doggin' My Heart Around
Posted by Charity Chic at 08:00