Any Chimp Can Play Human For a Day 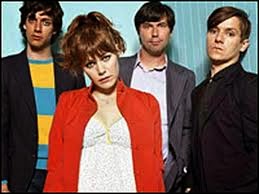 Rilo Kiley were probably one of the first bands that I discovered completely via music blogs.
On the strength of that I quickly acquired The Execution of All Things (2002), More Adventurous (2004) and their major label debut on Warner Brothers Under the Blacklight (2007)
Rilo Kiley consisted of former child TV star Jenny Lewis on vocals, Blake Sennett on acoustic guitar, Pierre de Reeder on bass and Jason Boesel on drums
Jenny Lewis had  also released the fantastic Rabbit Fur Coat with the Watson Twins in 2006 and followed this up in 2008 with a solo album  Acid Tongue.
She is now recording as Jenny and Johnny with boyfriend Jonathan Rice.
These two magnificent tracks are taken from More Adventurous which I consider to be their best album.
The last two times I have listened to Morton Through Midnight on BBC Radio Scotland, Tom Morton has played Portions for Foxes which planted the seed for this post.
So thank you sir!

Rilo Kiley - Portions for Foxes
Posted by Charity Chic at 08:00