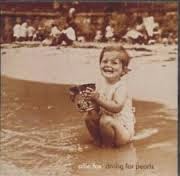 Allie Fox is a  character played by Harrison Ford in a 1986 film called The Mosquito Coast
Allie Fox is also the name of a British singer songwriter and acoustic guitarist who released an album entitled Diving for Pearls on the Scottish record label Vixen in 2000
Described in Q  somewhat pretentiously as "a high conceit, marvellously executed"  by Mojo as " a beautiful debut album" and by Bob Harris as " a really nice album"
It is a good find and an interesting blend of folk, blues and country
There is talk on the Vixen website of a follow up album Wayland's Blues but I'm not sure whether it ever saw the light of day.
If not that is rather a shame.
Still it was a pound well spent for what Whispering Bob so expertly puts it  - a really nice album