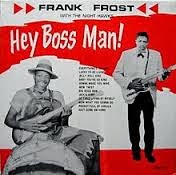 Frank Ottis Frost was born in Arkansas in 1936 and died in Arkansas in 1999 aged 63.
He started out as a guitarist but after an injury to his hand he turned his attention to the piano and in particular to the harmonica.
He soon caught the attention of Sam Phillips and was signed to Sun Records  were he released Hey Boss Man in 1962. The two songs featured here are from this era.
He then moved to Jewel Records where Scotty Moore was his producer.
In the 70's he became involved with a trio The Jelly Roll Kings with Sam Carr on drums and Big Jack Johnson on guitar.They released stuff on the Earwig Music Company  reuniting in the 90's to record on Fat Possum where he became acquainted with the likes of T-Model Ford and Junior Kimborough.
Given this company it is hardly surprising that years of cigarettes and alcohol finally took their toll leading to a fatal cardiac arrest.
Frank Frost - he was ice cool!

Frank Frost - My Back Scratcher
Posted by Charity Chic at 08:00