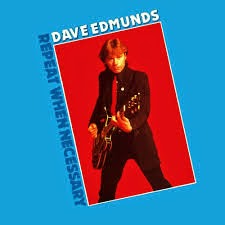 George  and Walter both posted tracks on Tuesday to commemorative the 70th birthday of Sir Dave Edmunds.
Coincidentally, or otherwise, I recently purchased his 1979 album on Swan Song  Records  Repeat When Necessary and thought this was as good a time as any to play a couple of tracks from it.
He is joined by the Rockpile boys - Nick Lowe, Terry Williams and Billy Bremner ( the guitarist as opposed to the late red haired Scottish footballer who could cause a fight in an empty room).
I have featured his versions of Elvis Costello's Girls Talk and Graham Parker's Crawling from the Wreckage.

Walter has also mentioned Dave Edmunds in his excellent What Happened to Pub Rock series and he may well have posted these tracks.
If so, I'm sure that he would have no objection to them being featured again.
Oh, and I have maybe been a bit previous about Dave's knighthood but I'm sure it is only a matter of time.
Enjoy!

Dave Edmunds -Crawling From The Wreckage
Posted by Charity Chic at 08:00