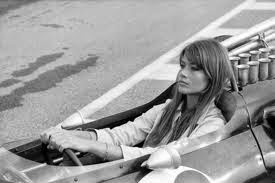 Francoise Hardy - oh la la.
The epitome of 60's chic - French style.
Actress, singer and popular cultural icon and if you believe the picture racing car driver although I suspect it may be from her 1966 film Grand Prix.
She has been recording music from 1961 to date.
Today's two tracks are taken from an excellent compilation The Vogue Years which features a whopping fifty of her songs recorded between 1962 and 1967.
The first is Dans le Monde Entier which reached number 16 in the UK charts in 1965 with the English version All Over the World.
The second La Maison ou j'ai Grande from 1966 is the French version of an Italian song Il Ragazzo della via Gluck (The Boy from Gluck Street) which has also been recorded in English as Tar and Cement, in Swedish  as Lycklisa Gatan and in German as Immer am Sontag.
Tres continental n'est pas?