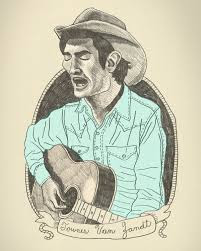 There were only two votes last week for the Be Good Tanyas with their version of Waiting Around to Die. However everyone who voted for Townes were very complimentary about their cover. The scores were Townes 5  BGTs 2.

Therefore Townes is still on track for a whitewash with the current scores of the door reading  Townes 4 The Rest 0. Can  fellow Texan troubadour Steve Earle do anything to stop the landslide?

Steve was always going to be a shoe in to feature here for a variety of reasons. Here are just three:

Any of the 15 tracks on the album (plus the additional 11 on the 2 CD version) would have been worthy of inclusion
After a great deal of thought I've gone for Delta Momma Blues which is the title track of an album which Townes released on 1989 on the Tomato label and one of the first of his records which I picked up from Echo records on Glasgow's Byres Road
Even although Steve throws some banjo (or is it mandola?) into the equation it is still Townes for me and not just for sentimental reasons.
Others, of course, may choose to differ
Steve Earle -Delta Momma Blues
Townes Van Zandt - Delta Momma Blues
Posted by Charity Chic at 08:00