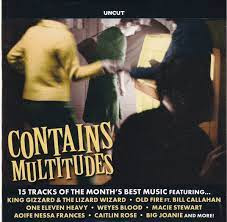 It is only on an occasional basis that I pick up a copy of Uncut or Mojo these days. I always find those containing new music quite interesting and they sometimes throw up acts worth following up.

I picked up Contains Multitudes along with Octobers copy of Uncut.Curiously it is catalogued as Uncut 202212. They always seem to attribute them to a month or so in the future. But I digress.

It is so named as the lead article was around the latest  British leg of Bob Dylan's Neverending tour and as you are all aware I Contain Multitudes is the first track on his most recent album release the excellent Rough and Rowdy Ways. But I digress again.

The purpose was to explore some new music and here are three which stood out. Weyes Blood is a name which pops up here and there from time to time and it is clearly an act that I require to explore further. I say act but rather it is actually a nom de plume for singer songwriter Natalie Mering. Grapevine is taken from her latest album And in the Darkness , Hearts Aglow on the Subpop label Khayem posted a much more informative post about this a few weeks back.

I am familiar with the next act  namely Americana star Caitlin Rose. I have a couple of her albums Own Side Now from 2010 and The Stand- In from 2013.. It appears that she has released nothing since until now  with CAZIMI, on Names Records from where Nobody's Sweetheart is taken.