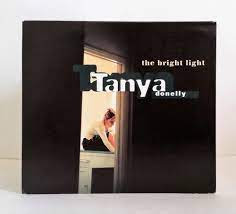 The final instalment of the Ballantrae haul and the third featuring the dulcet tones of Tanya Donelly.

Other than checking that there was a disc inside it and the correct one at that I hadn't really looked at this in any great detail until it came to playing it. It is in fact a CD single of the song The Bright Light taken from her 1997 debut solo album Lovesongs for Underdogs. As with all her stuff featured here both came out on the 4AD label.

As was the way of things back then two separate CD singles were released with different B-sides as it were.(I'm sure you know what I mean) The one below is attributed as CD1 and you can see what the other tracks are below to save me typing them twice (although what I have just typed is probably longer!).

CD 2 released on the same day (November 24th 1997 if you are interested) has Life on Sirus as track 2 and Moon Over Boston as track 3.

Songmeanings.com  feels that the theme for the album  seems to be about continuously being in the wrong relationship or the wrong situation. Those commenting on The Bright Light seem to be under the impression that it is about being abducted by aliens. You pay your money you take your choice but there seems to be a bit of a space theme on CD2.

My best ever Ballantrae haul of 8 albums and 1 CD single , 7 of which as things stand are keepers.

Tanya Donelly - How Can You Sleep