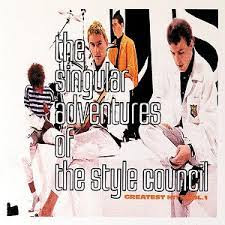 I wouldn't say that I have ever been a huge fan of The Jam, The Style Council or Paul Weller's solo work. Nevertheless I have acquired at least a couple albums of all three iterations mostly via charity shops.
In the case of The Style Council I have Home and Abroad on Vinyl and Cafe Bleu on CD as well as this one on both formats.
I  wasn't entirely sure as to the provenance of either version. I have just had a look at the vinyl copy and it seems that it came from Eastwood District Libraries who periodically sold off some of their stock. It has seen better days with a wee bit of wear and tear which was not uncommon for library vinyl and needed a good clean.
I think the CD copy came from my brother and sister -in -law when I inherited their CDs after they went digital.The CD contains 16 tracks , 2 more than rthe vinyl
I have only featured the band on a couple of occasions before with five of the songs on the album making an appearance (i.e all the better ones!). Here are another three. although I was pretty sure that Have You Ever Had it Blue had featured before. Apparently not. Maybe I baulked at the 12 inch version.
The Style Council - Have You Ever Had it Blue (12" version)
The Style Council -Long Hot Summer (12" version)
The Style Council - Speak Like A Child
This series has dragged on a bit but is slowly petering out. It will be gone by Christmas
.
Posted by Charity Chic at 08:00