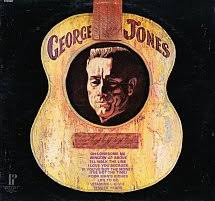 Only three records from the recent Vintage Country Vinyl haul to go.
George Jones is one of two artists who will feature twice. I'm still not sure if I will subject you to the final one yet.
Oh Lonesone Me  is on the Hilltop label. I'm not sure as to the date as it does not feature on the Wiki discography. Discogs also does not mention the year but is willing to sell it to you for as little as £1.35
There is a picture of him on the back cover sporting a crewcut  so I'm thinking early 60's. It does look like from it is around that era.

It has to be said that it is a far superior album to 15 Golden Classics Vol 1 which featured earlier in the series
Strangely the track Life to Go is listed on the front cover with all the other tracks but is missed out on the back cover.

Another artist featuring for the second time next week.