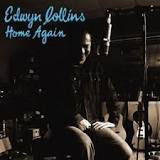 The aptly named Home Again is the sixth solo album by Edwyn Collins.
Initially recorded in late 2004 it was not completed until early 2007 and was released on 17th September 2007 on the Heavenly label.
The reason for the delay was, as I'm sure most of you are aware, because Edwyn suffered tow brain haemmorhages in February 2005 leading to a long period of hospitalisation followed by rehabilitation.

Initially the only things he was able to say were yes, no, Grace Maxwell and the possibilities are endless the latter of which became the titel of a documentary film on his recovery in 2014

All his solo albums are consistently good and Home Again is no exception, Critically well received reflecting both the quality of the record and the joy and relief to see the great man back making music again.