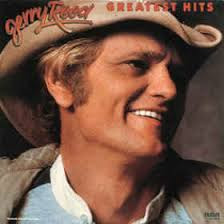 This is the 11th and final post in the latest iteration of this series.
All 11 albums were purchased as a job lot a couple of months ago from my local charity shop for the grand total of a tenner.
None of the previous 10 have been startingly brilliant but they have all been reasonably acceptable with Hawkshaw Hawkins, Ferlin Husky and the second George Jones album being the pick of the bunch.


The final album by Jerry Reed (Greatest Hits (A loose use of the term))  however is an absolute shocker and will not be a keeper. Probably karma for me inadvertently declaring that I had 10 albums to pay for when I actually had 11.


Jerry Reed Hubbard was a country singer and actor possibly best known for Guitar Man subsequently covered by Elvis Pressley.
He featured as an animated actor in The New Scooby Doo Movies and as a slightly animated actor  in Smokey and the Bandit where he sang the theme tune East Bound and Down.Being a close pal of Burt Reynolds helped.
Unfortunately the only good thing about his song She Got the Goldmine ( I Got the Shaft) is the title


There have since been two further vintage country vinyl purchases and there are others kicking about which have yet to feature so look out for a third series in due course.

Jerry Reed - East Bound and Down


We are now away on holiday for two weeks. Due to time pressures and my (hopefully temporary) inability to share songs stored on my new laptop there will be nothing to see during our break with the exception of a couple of scheduled posts.
Posted by Charity Chic at 08:00