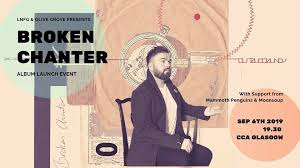 As mentioned yesterday we went to the album launch of Broken Chanter at Glasgow's CCA a week ago today
It was the first time I'd been to the CCA since it was done up and I was pretty impressed. A nice wee theatre styled room for the music which was seated which greatly pleased Mrs CC.

The support act were Cambridge based Mammouth Penguins who I quite enjoyed.

The Broken Chanter set was the album in it's entirity with a couple of Kid Canevral songs stuck in the middle for good measure.
The album  (an Olive Grove /Last Night from Glasgow co-production) is very good indeed.Atmospheric indie folk with a smattering of Gaelic here and there.
A tight band consisting of David McGregor (aka Broken Chanter) on vocals/guitar , Gav Prentice on bass,Audrey Tait on drums, Kim Carnie on keyboards and Jill O'Sullivan on violin and vocals.

McGregor is a great front man - full of patter and interaction with the audience.
I've a couple of  their songs here and there but am not all that familiar with his former band Kid Canaveral. I'm going to make it my business to track down more of their music.
I also remember that Jill O'Sullivan had performed as part of the band Sparrow and the Workshop  a few years ago who were also well worth a listen.

Another very good night out. Thanks to all those involved in putting it togther

Sparrow & the Workshop - Into the Wild


Things are pretty hectic here at the moment for one reason or another (but in good way) so expect a slightly reduced service on these pages for the next few weeks.