Remember You're a Woomble 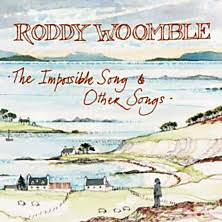 Roddy Woomble is perhaps best known as the front man of the indie band Idlewild.
However in the mid to late 2000's be began to turn to folk music, took to wearing tweed, moved to the Isle of Mull, wrote a column for the Sunday Herald and curated the Ballads of the Book a collabaritive project between Scottish writers and musicians.
In short he was the prototype hipster.
Wiki lists 2011's The Impossible Song and Other Songs as his third solo album. However the alleged second one 2008's Before the Ruin is attributed to Drever, McCusker and Woomble the Drever in question being Kris and the McCusker John.


Some of you may recognize the wonderful artwork on the cover. It is by Mairi Hedderwick who wrote and illustrated the Katie Morag children's books and who also produces and illustrates an annual Hebridean Diary which Mrs CC faithfully purchases.


Recorded at An Tobar arts centre on Mull.