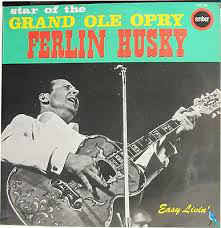 You could be forgiven for thinking that the name of this Ferlin Huskey album is Star of the Grand Ole Opry.
You would be wrong there - if you read the small print it is in fact Easy Livin’.
Ferlin was the first artist to appear in the rehash of this series and here he is making a return a couple of months later
Not much to add from the last time round so I'll quote some blurb from the album sleeve

He never permits himself to give acommonplace rendition of even the simplest compositions or routines.His approach and conception of any piece of music is inventive,creative, original