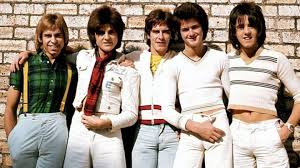 It was George, of course, who started it. Isn't it always?
He made some fairly disparaging remarks about Sweet Virginia a song by the tartan teeny pop sensations The Bay City Rollers.
As one who has owned up to having been such a fan that she often dressed head to toe in tartan Alyson was quick to spring to their defence


Fairly even stevens then until the bold Mr Goggins stepped forward. It appears that Ernie is such a big fan that he has even gone as far as amassing tribute songs about Prestonpans' finest.
Trying desperately to regain some credibility he throws in the names Nick Lowe and Yo La Tango but by then the damage is done so let's here it for  Tartan Horde.


While most of the above is admittedly fairly tongue in cheek I remain of the opinion that Shang-a- Lang is a stonking pop song.
To quote Alyson there just isn't enough Roller goodness around here