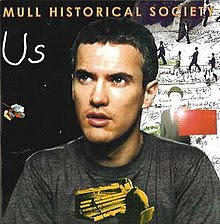 I'm getting there slowly. After recent Woody Guthrie and R.E.M. posts I give you Us by Mull Historical Society as the third of four recent charity shop purchases for two quid.
From 2003 it is the second of three albums released by Mull born singer songwriter Colin MacIntyre under the Mull Historical Society nom de plume prior to two albums under his own name and then a further two by MHS.

The debut MHS album  Loss is already on the shelves along with Colin MacIntyre's Water. I don't know about you but I'm getting quite confused.
Pleasant melodic pop music which is easy on the ear. Described by the NME as a joyous slice of orchestral prozac.
Warner Brothers didn't necessarily think so as the dropped him/them shortly thereafter.

The songs are pretty much much of a muchness but the first song earns it's inclusion by dint of a snippet from the Shipping Forecast.Aspiring artists take note.

Mull Historical Society - The Supermarket Strikes Back
Posted by Charity Chic at 08:00