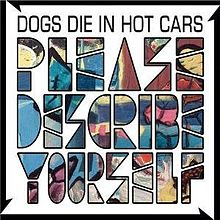 The final recent charity shop purchase is Please Describe Yourself  the 2004 debut album by Dogs Die in Hot Cars.
A band from St Andrews in Fife formed when the majority of members where at school there and finalised following a move to the meteropolis that is Glasgow.
On the V2 label and produced by Clive Langer and Alan Winstanley and as I recall it was released with a fair degree of hype and I suspect with a fair degree of investment.

Mrs CC is hearing a bit of Dexys, I'm hearing a lot of Franz Ferdinand.
I must admit I'm not sure as to whether it is a keeper or not. Decent enough pop music but I can't see me playing it that often. I suspect it is geared to a younger demographic.

A band whose name may present a challenge to the Twitter sensation that is Bands F.C.

This post was originally scheduled for Monday but was overtaken by events, then Tuesday and Wednesday with me forgetting there were series to be progressed. It finally sees the light of day on Thursday!
Posted by Charity Chic at 08:00