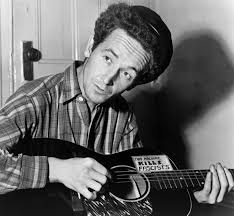 The other day I bought 4 CD's for 2 quid in a charity shop. I'm still swithering about some of them. One that is definitely a keeper is Ramblin' Round a 2 CD anthology on the work of Woody Guthrie.
I wasn't sure if I already had such a thing but apparently not.


You should all be familiar with Woody. A wandering singer songwriter and folk singer who has influenced subsequent generations both musically and politically.
The main influence in Bob Dylan's career with Dylan  tracking him down to Greystone Psychiatric Hospital in New Jersey where he was dying from Huntington's Chorea. Described by Dylan as like seeing Socrates talking to a young Plato.

If you haven't read Woody's autobiography Bound for Glory you should do so at the earliest opportunity.
I think it would be safe to say that he would have little time for the Orange Toddler who when not playing golf or tweeting nonsense is making an excellent job of destroying America's credibility.

As Steve Earle wrote in Christmas in Washington:

Come back, Woody Guthrie,
come back to us now,
tear your eyes from paradise
and rise again somehow.

Woody Guthrie -This Land Is Your Land
Posted by Charity Chic at 08:00