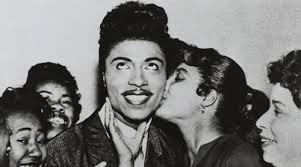 Nearly there - only two weeks to go.

Two artists who have graced these pages on more than one occasion for you today but with songs which have not previously featured.

Richard Wayne Penniman is also known as The Georgia Peach but much more famously as Little Richard.  Good Golly Miss Molly, you can't have a series with the word Little in the title without featuring the Great Man.
Similarly, O My Soul, any series with the word Large and similar meaning words would certainly be incomplete without the inclusion of Big Star.

Stay tuned for a series finale next Wednesday .. probably.