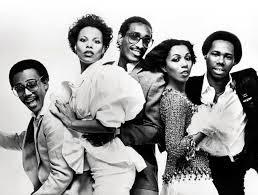 The bar has well and truly been raised this week as Charity Chic presents quite possibly the best disco act of them all Chic.
Lead by the geniuses that are Nile Rodgers and Bernard Edwards Chic describe themselves as the rock band of the disco movement that made good on hippie peace, love and freedom.
That's good enough for me.

Not content with producing disco classics such as the three featured below they were the brains behind countless disco hits for the likes of Sister Sledge, Diana Ross and Sheila and B Devotion.
Carly Simon,  Debbie Harry and David Bowie also owe them a debt of gratitude as do all those bands who have sampled them or been inspired by them.