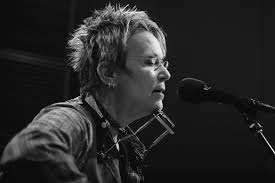 A week or so ago Rol posted a feature on Rifles and Rosary Beads the new album by Mary Gauthier. It sounds like an interesting and worthy project and one that I should really check out in more detail.

The title track would make a worthy addition to this series but given the fact that I don't have it I'm going to plump for the title track of her second albums 1999's Drag Queens in Limousines.
I think that this song may well be autobiographical given that she ran away from her adopted parents and lapsed into a world of drugs and alcohol spending her 18th birthday in jail.
Thankfully she managed to turn her life around given that she has been sober from 1990. She wrote her first song at the age of 35.
If you like your country real and gritty (and yes Mrs CC sometimes depressing!) than Mary is someone who you should become acquainted with.

Mary Gauthier - Our Lady of the Shooting Stars