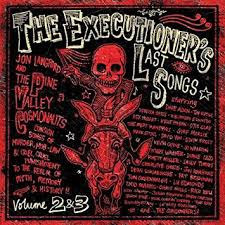 The second instalment of the Jon Langford and the Pine Valley Cosmonauts trilogy of The Executioner's Last Songs on the ever wonderful Bloodshot label.
For some background information on the rationale behind this series see last week's post

Two songs today that you will all be familiar with but not necessarily by today's featured artists.
Banks of the Ohio is a 19th Century murder ballad most famously recorded by Olivia Newton John.
Johnny Cash with the Carter Family, Pete Seeger and Dolly Parton and Porter Wagoner are among the many other artists to record it.
Today's version features soul legend Otis Clay who was Chicago based hence the Bloodshot connection.

Tom Jones is probably responsible for the best known version of Green, Green Grass of Home.
Porter Wagoner (again), Bobby Bare, Jerry Lee Lewis, Elvis Presley and Joan Baez among loads of others have also covered it. Dave Alvin also covers it on Volume 3
Here Bloodshot stalward Kelly Hogan, known round here as The Voice, does the honours.I would argue that no-one does it better.

Third leg of the trilogy next Tuesday