The Leaders of the Pack? 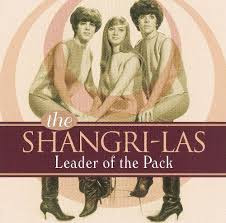 
Named after a restaurant in their native Queens district of New York they recorded and toured both as a foursome (sisters Mary and Betty Weis and twins Marge and Mary Ann Ganser) and as a trio  when Betty dropped out after giving birth before subsequently re-joining the Group.


They were aged  between  15 and 17  when they started out  and quickly  courted a streetwise  tough girl image particularly after the success of Leader of  the Pack.
Their songs were like articles from Jackie magazine set to music
Like many good pop bands they shone brightly but briefly with the best of their work having taken place between 1964 and 66


The Shangri-Las - Leader of the Pack

The Shrangri-Las - Give Him a Great Big Kiss
Posted by Charity Chic at 08:00