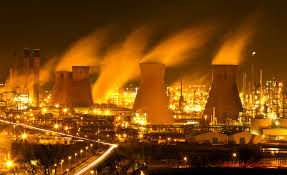 Grangemouth, on the banks of the River Forth, is probably best known for it's oil refinery. It is run by INEOS a company owned by multi-millionaire Jim Ratcliffe a man who hates unions but loves fracking.

Grangemouth is also where one of the most original bands to have come out of Scotland hails from. That would by Cocteau Twins
A band formed in 1979 who lasted until 1997.
They consisted of Robin Guthrie on guitars and drum machine, Liz Frazer on vocals and Will Heggie on bass who left and was replaced by multi instrumentalist Simon Raymonde.

Liz Fraser has a totally unique ethereal singing style and I would describe her as a shy Scottish cousin of Bjork and Kate Bush.
I've no idea what she is singing about most of the time but it always sounds quite wonderful.


Those of you who are now aware that Cocteau Twins is an anagram of Acoustic Newts no doubt set your alarm clocks early on a Saturday (or stay up late in the case of Brian) to participate in Rol's
Saturday Snapshots which is one of the best things on the Internet  and a true weekend highlight.