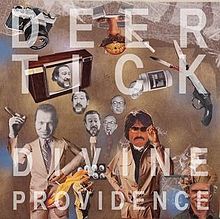 I came back from holidays to find Divine Providence by Deer Tick waiting for me.
I had ordered it from Discogs after having heard the track Main Street on an Uncut compilation and one which I featured a  few weeks back.

I was a wee bit surprised to find that it was not necessarily atypical of the fayre on offer. Many of the other tracks are somewhat more rawer and rockier. They put me in mind of the likes of Marah and the Drive By Truckers.

From 2011 (on Partisan in the US and Loose in the UK) it is their 4th album and a clever play on words given that they come from Providence, Rhode Island..Described as louder and faster than previous releases with the band aiming to capture the raw and spontaneous kerosene blaze (Rolling Stone review).
I'll have some of that, thank you very much

Deer Tick - Something to Brag About
Posted by Charity Chic at 08:00