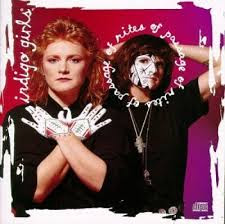 A few days ago over at Martin's place I joined in a discussion about the first CDs that folk had bought.

Mine were Rites of Passage by the Indigo Girls and Out of Time by R.E.M. bought in Boston around 1992. Probably not as good as the two Martin featured. I had a quick check and it seems that neither has featured here before.

As I mentioned I bought them before I had a CD player which my pals thought bizarre. My argument was and remains it is better to have some CDs  you can play when you get a CD player rather that get a CD player and have nothing to play!

At the time in America CDs were sold in cardboard packaging about a foot long with the CD at the top and empty space below. Coincidentally R.E.M.were one of the bands to speak out against this needless waste.Although I agree with this I'm kind of glad I bought a couple in this format before it was quite rightly dropped.