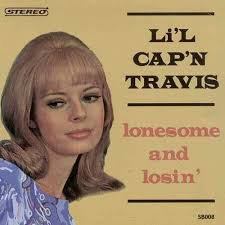 We are off to Austin and Dunfermline today for this week's Little and Large installment. I suspect that it is not often that these two places feature in the same sentence.

L'l Cap'n Travis are (or I suspect were) an Austin band who I saw once and who have a rather good 2001 album Lonesome and Losin' on the SBN label.The inner cover shows them on stage with a goat. Other than that I know nothing.

Big Country however need no introduction although I believe it may well be the first time that they have graced these pages (sorry Brian!)
Formed following the demise of the Skids and fronted by the late great Stuart Adamson here is side 1 track 1 from their 1983 debut album The Crossing.
I have a vague memory of having seen them at Strathclyde Uni Union shortly after the formed. They only had about 4 or 5 songs which they played twice!

Big Country - In a Big Country
Posted by Charity Chic at 08:00