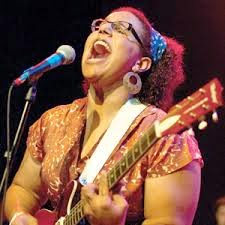 Alabama Shakes have a new album out Sound and Color (these Americans with their dodgy spelling!)
I figure that this makes it alright for me to post something by Brittany and the boys from their 2012 debut Boys and Girls for the four people on the planet who are not familiar with it.
I haven't heard the new one yet but from what I can gather from what I have read it is a wee bit more soulful than it's predecessor hardly surprising perhaps given that their Athens, Alabama base is only about an hour's drive from Muscle Shoals.
Good for them for not merely repeating a winning formula and being brave enough to try out some new stuff.
It will be interesting to see whether they retain their audience  or whether they were seen as that year's fad and folk have moved onto other stuff.
I had a minor panic when I couldn't find my copy of Boys and Girls.Turns out it was filed correctly in the Blues/Rock'n'Roll/Rockabilly section but incorrectly alphabetically in that it was in between Nic Curran and Dr John. That has now been rectified.

Alabama Shakes - I Found You

Alabama Shakes - You Ain't Alone
Posted by Charity Chic at 08:00