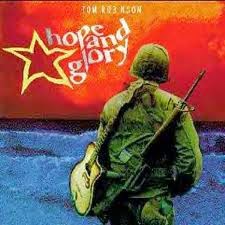 Tom Robinson's music career enjoyed a brief resurrection in 1983 following the success of the song War Baby a single  which reached number 6 in the UK charts and subsequently appeared on  his 1984 album Hope and Glory on Castaway Records which reached the dizzy heights of number 21.
I've just given it a listen to for the first time in ages and there are a couple of good songs on it.
I've never particularly been a fan of Steely Dan and indeed I much prefer Tom's version of Rikki Don't Loose that Number to the original (cue much wailing and gnashing of teeth)
Atmospherics: Listen to the Radio is pretty tasty too.
He is now a radio presenter

Tom Robinson - Atmospherics:Listen to the Radio
Posted by Charity Chic at 08:00