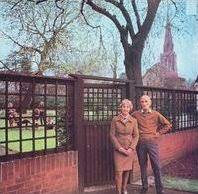 We are now up to Unhalfbricking the band's third album and the second from 1969, in this instance July 1969. Notable for a few things. It is the album which features the magnificent Who Knows Where the Time Goes.In 2007 Radio 2 listeners voted this their Favourite Folk Song of All Time and they will get no argument from this quarter. I've posted it a couple of times before and make no apologies for doing so again.

It is also the first of their albums on which fiddle player  Dave Swarbrick makes an appearance.It would be the last one to feature drummer Martin Lambie who sadly died in a road accident alongside Richard Thompson's then girlfriend Jeannie Franklin.

Unusually for the time, and for a not that well known act, the name of the album or the band does not appear on the cover. I won't annoy Spence by mentioning that the couple on the cover are Sandy Denny's parents, It was ranked at  number 341 in my copy of the Virgin all-time top 1000 albums book published in 1998.

I actually did a post on this album in April 2021 but did not have a physical copy at that time.Fortunately that has now changed.

Fairport Convention -Who Knows Where The Time Goes