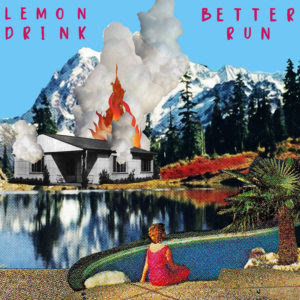 Lemon Drink are a band that are signed to Last Night From Glasgow. They are a four piece consisting of Sophie Bartholomew (Vocals & Guitar), Kristie "KC" Cunningham (Lead Guitar), Lauren Peters (Bass) and Harry Smith (Drums)
They released their debut single A Song For You in October 2019 and followed this up with an EP Better Run in March 2020 just as lockdown kicked in.
LNFG writes Their debut EP, ‘Better Run’ (released 13/03/20), features 3 brand new tracks that further showcase their wit and zeal in the face of everyday challenges experienced by 20-something women. The EP was recorded at La Chunky Studios with production duties split between Johnny Smillie (Thrum), Jonathan Lilley (The Gracious Losers) and Chris Smith (Life Model).
They also appeared on The Isolation Sessions with a cover of Teen Canteen's Cherry Pie . I am not aware as to whether there are plans for an album in the near future but note that they are scheduled to play the Hug & Pint on 31st July
That's just about all the information that I have save this blurb  from Alive and Gigging
Lemon Drink -A Song For You
Lemon Drink -Pull Your House Down
Lemon Drink -Cherry Pie
Posted by Charity Chic at 08:00