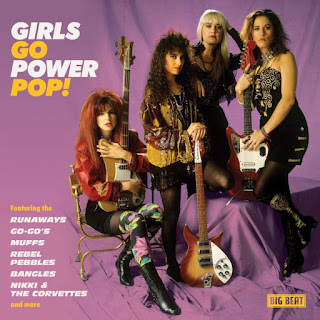 I've just discovered an album that I downloaded and then forgot all about. I can't remember having played it before.
The album title is quite self explanatory.Released on the ever excellent Ace label in 2020  Girls Go Power Pop! was released with the following blurb
Nothing shakes some action like a snappy guitar-based pop song delivered with a powerful beat, boundless energy and joyous enthusiasm … especially when performed by girls!

25 tracks and I would say that I am probably only familiar with about half a dozen of the acts so quite an education.

I couldn't not feature the first track which is one of those that I actually know. Cherry Bomb by The Runaways sets a pretty high bar for the rest to follow.

My final choice today is another new to me one. Universal Honey are a Canadian Power Pop band fronted by vocalist Leslie Stanwyck. They have been on the go since 1992 and have released seven albums. Just Before Mary Goes is a song from their 1993 debut album Magic Basement.

Nikki & the Corvettes - He's a Mover