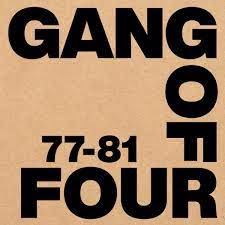 I don't have it and as it retails for around £85 it is unlikely that I ever will. I have featured them on a few occasions before with the choice of tracks usually rotating between To Hell With Poverty, At Home He's a Tourist and I Love a Man in Uniform.

Armalite Rifle appeared on the Damaged Goods EP from October 1978.Outside the Trains Don't Run on TIme was the last track on side 1 of Solid Gold from March 1981. And finally Damaged Goods from the debut album Entertainment! from September 1979

Even after 40 years their songs still sound fresh and relevant.We could do with more bands like this now given everything that is currently going on.

Gang of Four - Outside the Trains Don't Run on Time