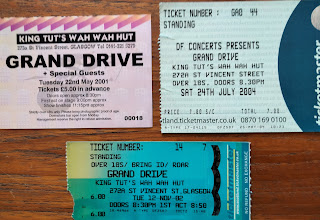 It probably won't come as much of a surprise that there were a few acts that I saw at King Tuts on more than one occassion.

One such band was Grand Drive Here is the blurb from Discogs:

Grand Drive is  were an Alternative Country-Rock-Indie bandbrothers Danny Wilson (lead vocals/guitar) and Julian Wilson (keyboards) were originally from Australia, but grew up in the stony southwest London suburb of Sutton in the '70s.In school, they met bassist Ed Balch and formed their first group, Soul Green, with several temporary drummers. It wasn't until 1992 that they found a more permanent stickman in Paul Wigens and changed their name to Grand Drive, taking their name from a long, meandering road in South London that connected Raynes Park (where one of the Wilsons lived) with Sutton.

I must confess that I wasn't that much of a fan but my pal Goggs was. The only thing I have by them is a copy,courtesy of him, of True Love and High Adventure an album from 2002 on the Loose label.Stragely I have never seen anything by them in a charity shop.

It seems that they released a total of five albums between 1999 and 2007. They spilt in  2007 with Danny Wilson going on to form Danny and the Champions of the World a band that I have heard of but never knowingly heard.

It is good to see that by 2004 that they had progressed from a Tuesday to a Saturday band with an appropriate increae in admission fee!

Grand Drive - A Ladder to the Stars