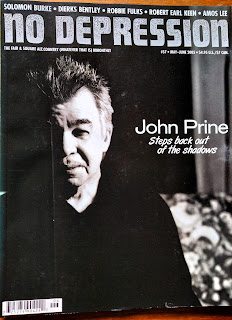 #57 -   May - June  2005
After last week's Vic Chesnutt I am on slightly more familiar territory this with with the legend that is John Prine.
Having said that I don't have that much material of his and am not familiar with the featured 2005 album Fair & Square.
I know enough about him to know that he was a terrific songwriter and a top bloke. Most of you will  recognise some of his songs even if  it is the versions that have been covered by someone else .
Examples include Bonnie Raitt with Angel from Montgomery, Swamp Dogg with Sam Stone and both Alabama 3 and Nanci Griffith with Speed of the Sound of Loneliness. Here is a fuller list
Mrs CC and I  once won tickets to see him at the Glasgow Concert Hall. He was about an hour late in coming on and  extremely apologetic but quickly won the audience over with an absolutely terrific show playing for a couple of hours by way of compensation.
He was a late developer having been writing songs since  being drafted to the army and as a mailman prior to being "discovered" by Kris Kristofferson and Paul Anka.
Along with his third wife, Irish woman Fiona Bunetta he set up the independent record label and mail order service Oh Boy Records in 1991. It was pretty revolutionary at the time and was a precursor for the likes of Bandcamp.
Sadly John died on the 7th of April 2020 aged 73 from complications caused by Covid- 19
For this weeks One from the Top I've gone for the soul legend  Solomon Burke with the opening track from his 2006 country orientated album Nashville produced by No Depression favourite Buddy Miller.
John Prine - Lake Marie
John Prine - Sam Stone
John Prine -He Was in Heaven Before he Died
Solomon Burke - That's How I Got to Memphis
Posted by Charity Chic at 08:00