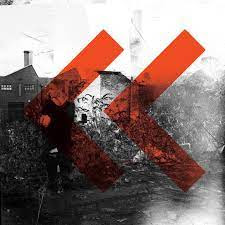 Long suffering readers will know that I am not a huge fan of electronic music and as such it very rarely, if ever , makes an appearance on these pages. Well, it does today.

I bought Hinterland the second album from 2015 on the Warp label by Mancunian Julie Campbell under her nom de plume LoneLady.I bought it on the back of the track Bunkerpop appearing on a Mojo compilation called Modern Life is Rubbish subtitled 15 tracks of everyday British angst.

Julie apparently drew inspiration from the landscape of her childhood home in Audershaw and the tower block that she had been living in as an adult but you had probably worked that out for yourselves.

As I'm now at the Ls in my cataloguing I gave it its first listen in ages. I found it quite enjoyable but maybe a bit intense and I would struggle to get through it all in one sitting. The kind of album for me that it is better to dip in and out of.