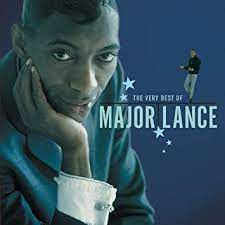 Major Lance first crossed my radar when he appeared as a featured artist on the Craig Charles Funk and Soul Show on 6 Music one Saturday evening when there was nothing good on the telly.(no change there )

This led me to acquiring the above Best Of collection which was released by Sony in 2000.The back cover of the CD tells us that Chicago boasted its own instantly identifiable brand of sould during the 1960s and no artis typified that breezy, lighthearted, utterly infections Windy City sound than Major Lance.In a town loaded to bursting point with scintillating ,loose limbed dance specialists, the nimble,rail-thin Lance introduced a series of dynamic steps to the appreciative masses in front of percolating grooves cooked up by songwriter Curtis Mayfield,producer Carl Davis and arranger Johnny Pate that helped to define the city's soulful preeminence.

Tht saved me writing something a lot less flowery. Trivial facts time: his real name is actually Major Lance and he had nine children one of whom is Keisha Lance Bottoms who until recently was the mayor of Atlanta.

He was an important presence on the UK Northern Soul Scene and briefly re-located here from 1972- 1974. He died in 1994 aged between 52 and 55 the uncertainty being due to conflicting accounts of his date of birth.