Keeping Up With the Joneses -Howard 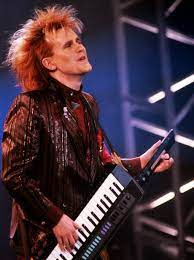 George has done a good job pretending that he is eagerly waiting for Norah as the potential highlight from this series.

However, I know that he is a long time fan of the synth pop legend that is Howard Jones .He is jealous that I have a copy of Best of Howard Jones and in particular the fact that I only paid 20p for the privilege.

I mean to say look at his credentials.His 1984 debut album Human's Lib reached  number one in the UK Album chart. From 1983 to 1986 he had ten Top 40 singles , six of which (including the three below) reaching the Top 10. Hardly surprising then that he has a net worth of $16 million

I'm happy to report that he is still going strong, no doubt on the retro circuit. Sadly the same can't be said of his hair. Howard Jones - What is Love?

Howard Jones -Like To Get to Know You Well