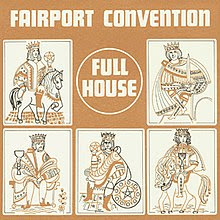 Today we have drawn a Full House given that this is the title of Fairport Convention's 5th album from July 1970 again on the Island label and also the last to feature on the 5 Classic Album series.
A couple of important chances in personnel from Liege & Lief. Sandy Denny had left to form Fotheringay leaving the band without a female singer for the first time.Founder member Ashley Hutchings had also left to form Steeleye Span with Dave Pegg joining on bass. It was also the last album to feature Richard Thompson who was to leave to pursue a solo career so very much a changing of the guard.
Although not in the same leage as the 1969 triumveate it was never the less reasonably well received  with Rolling Stone describing the album as an English equivalent to The Band.and Allmusic claiming thai it was actually more viscerally exciting than its predecessor
Before the album was officially released Richard Thompson requested tha the song Poor Will & the Jolly Hangman be pulled as he was not happy with his guitar solo.It was too late to replace the album cover and the remaining tracks appeared in a different order.
The 2001 reuissue includes all eight tracks in the original order and this is the version in the boxset.
My verdict -it was interesting to heare their 1st and 5th albums which bookend the great 1969 sequence of What We Did on Our Holidays, Unhalfbricking and Liege and Lief. They both have their merits so overall I'm pretty happy wth this 5 CD Boxset.
Fairport Convention - Walk Awhile
Fairport Convention - Sir Patrick Spens
Posted by Charity Chic at 08:00