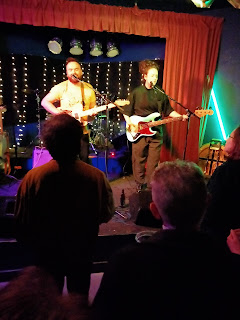 I went to see Broken Chanter, ably supported by Raveloe , at  Shawland's Glad Cafe on Friday night and very good they were too. The show was put on by Lloyd Merideth from Olive Grove Records and it was good to have a chat with him

Broken Chanter, as many of you will know, is a band led by David McGregor who used to be in Kid Canaveral. To date they have released two albums on Olive Grove/LNFG 2019's eponymous Broken Chanter and pretty recently Catastrophe Hits.

This show was to promote the latter but the set included songs from both. The four piece band were in great form. David has a a wonderful self deprecating sense of humour and interacted with the packed audience and fellow band member  between songs.Cambridge, where he recently played, came in for a particularly hard time.

For me the highlights from Catosrophe Hits were the opener Dancing Skeletons, A Sad Display and the excellent and topical Extinction Event Souvenir T-Shirt. I should imagine that you will be wanted to buy this album to hear these for yourself. Therefore I'm sharing Should We Be Dancing? from the debut album which was also excellent live. The album can be purchased via Bandcamp

The albums are a mix of indie rock and folk with a slightly Gaelic feel. The last time I saw him there was an emphasis on the folk side. This time round it was all out indie rock. 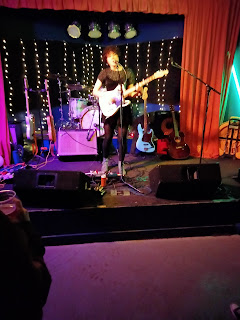 Support was from Glasgow based singer songwriter Kim Grant who goes by the stage name of Raveloe.She featured most of the songs on her 2021 EP Notes and Dreams on Olive Grove and a few new ones. She also told a very amusing story about a dead dog in a suitcase. I'd seen Broken Chanter before but this was the first time I had seen her and she didn't disappoint.

All in all an excellent evening.

Broken Chanter -Should We Be Dancing?