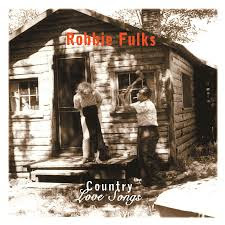 You can't really go wrong with a Robbie Fulks album with the exception of Let's Kill Saturday Night  when he briefly left Bloodshot for the mainstream Geffen label.

My go to Robbie Fulks record is always his debut from 1996 Country Love Songs  album number BS011 on Chicago's Bloodshot label. Although his early years were spend in North Carolina Robbie is very much a Chicago instituition.
I think I first heard hin on the Andy Kershaw radio show with She Took a Lot of Pills And Died.That was enough to make me track down the album.
That song won't feature today as it has featured here before on a couple if occassions. Similarly Rock Bottom,Pop.1 and Papa Was a Steel-Headed Man have also graced these pages.
Therefore you are getting another couple of numbers from the album. Don't worry though there is no reduction in quality.

Described by Jack Weaver on allmusic as cleverly twisted, deliciously irreverent, and one of the best of the new country singer/songwriters
In No Depression magazine Kevin Roe writes Country Love Songs touches all of the right traditional country bases in showcasing Fulks’ knack for memorable melodies and gleefully left-of-center lyrics

No home should be without this album. For people who don't think they like country music

Robbie Fulks - Every Kind of Music But Country