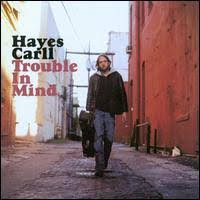 Houston's Joshua Hayes Carll has been releasing records since 2002 but it was not until the release of his third album Trouble in Mind in 2008 on Lost Highway Records that he began to receive more wider recognition.
Lost Highway is a subsiduary of Universal Music Group Nashville who recognised an opportunity to capitalise on the increasingly popular Americana sector. The likes of  Lucinda Williams and Steve Earle also got snapped up around this time


Hayes by this stage had a growing reputation as a poetic singer-songwriter who often injected a degree of humour into his songs.
She Left Me For Jesus is probably his most famous song but  steers dangerously close to being seen as a novelty song.
Drunken Poet's Dream co-written with the great Ray Wylie Hubbard , and Bad Liver and a Broken Heart written by Scott Nolan are probably a truer reflection of hiscraft.


I couldn't really get into KMAG YOYO  (a US Army acronym for Kiss My Ass Guys You're On Your Own  apparently ) the 2011 follow up and consequently didn't bother with 2016's Lovers and Leavers and  2019's What It Is.


Trouble in Mind also features such luminaries as Al Perkins, Pat Buchanan, Will Kimbrough, Fats Kaplin, Thad Cockrell and  Dan Baird a veritable who's who of Americana a number of whom have previously graced these pages.

Hayes Carll - She Left Me For Jesus