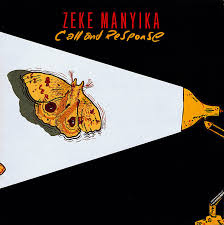 Call and Response a 1985 album by Zeke Manyika on the Polydor label is my 4th charity shop purchase of 2020. Bought for £1.99 in Oxfam on Glasgow's Victoria Road.

Bought primarily for the song Kelvingrove which I used to have on cassette and which has long been a favourite of mine.
Zeke was born in Zimbabwe  but has spent most of his life in Britain including Glasgow were Kelvingrove Park is located.
He was the drummer in Orange Juice from 1982 to 1984 playing on their massive hit Rip It Up.He also played on Edwyn Collin's solo album Hope and Despair
He has also featured on records by The Style Council and The The.

Zeke Manyika - Call and Response
Posted by Charity Chic at 08:00