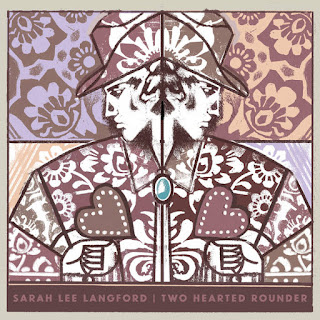 Two Hearted Rounder, the new album from Sarah Lee Langford, is on a precipice. More specifically: A barstool – a place where life is messy, but the whiskey is neat. Backed by a gang of Birmingham, AL’s greasiest rockers, including members of The Dexateens and Vulture Whale, Two Hearted Rounder is blessed with loose limbs as well as deadly aim.
The Bandcamp page of Sarah Lee Langford is not mucking about.

I'D no idea what a Two Hearted Rounder was but I suspected that it was not complimentary
A little research confirms this stating that a rounder is a man of poor worth and habits.Well that narrows it down a bit.


Thanks are due to George for bringing this one to my attention. He's clearly not a rounder.
There are obvious comparisons to the great Laura Cantrell  and  also to the likes of Gillian Welch which is not a bad thing. Indeed, it is a very good thing.

The album is from 2019 and is on the Cornelius Chapel record label.
I can't find much info on Sarah Lee but  the quote at the top of the page suggests that she may be from Alabama. But then again, maybe not.