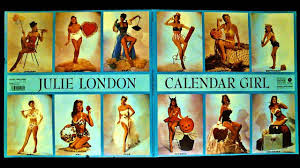 Sorry George, I couldn't resist it. Plus Brian made me do it, or at the very least actively encourged me because let's face it after posting all the other songs on the Calendar Girl album on the first (or second) of the month over the last year the completist in me couldn't miss out this song penned by Arthur Hamilton the man who gave us Cry Me a River.

Plus it also allows me to feature Julie's many topical but risque costumes in their entirity.

And also when reading a post over at Rigid Digit's place I discovered that a band called The Kick once released a song called Julie London.

There. That's it finished now. Honest.