State of the Union - Mississippi 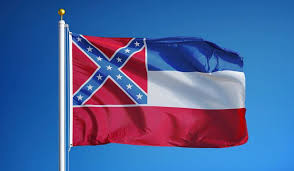 Yes that is indeed the state flag.

R. L. Burnside was born in Mississippi. If you do nothing else today just watch this from 1978, it is absolutely fantastic.

And here’s another  song.

Phil Ochs - here's to the state of Mississippi

This song really should not still be relevant 55 years after it was recorded. So that’s two songs I’ve given you that will not be surpassed by anything else you hear today.

Next is a track by late 60s hairy hippy rockers  Mountain (and for crying out loud don’t show any children a photograph of this lot, they’ll be scarred for life)

Obligatory country track is provided by Charley Pride, a lovely velvety voice he has here:

I’ll spare you the dreadful Merle Haggard song, and instead give you this majestic song from Peace To The Neighborhood, which comes pretty damned close to being as good as the first two tracks above:

Pops Staples - down in Mississippi

Nina Simone’s track is simply not nearly good enough for me to post. And the one I know you wanted, by Pussycat is not about the state as far as I can make out from the lyrics.

Instead, here’s Chester Arthur Burnett, who was born in White Station, Mississippi:

Alexander O’Neal and “Hound Dog” Taylor were born in Natchez.

The song Jackson, made famous by Mr and Mrs Cash, is not about Jackson, Mississippi, I checked. But, looka yonder, here’s a song that references Elvis Presley’s birthplace:

From when Nick Cave was good…..

And here’s another  blues song:

I can’t work out what Jackson Lucinda Williams is referring to so I can’t include it here.

Not quite an ICA, as there are 7 tracks, not the ten as required by JC, but when put together  still album length. A short album of ca. 30 mins, but Pet Sounds is shorter, as is Last Dance Before Highway.


CC writes
Here are three to complete the ICA.
Surprised George missed the first one

Jim White - Handcuffed to a Fence in Mississippi