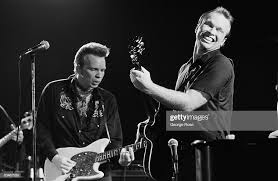 When I went to see Dave Alvin and Jimmie Dale Gilmore (which was as brilliant as you would expect) Dave mentioned that his big brother and fellow Blaster Phil had been in hospital recently but was thankfully on the mend.
Then I featured The Blasters with Hollwood Bed as part of my ICA contribution to George's California State of the Union post.

All of which got me thinking that the band who gave us American Music would be just the thing to shake the dregs of the week  out our hair and to blast us into the weekend with three numbers from Testament -The Complete Slash Recordings.

The Blasters -Rock'n'Roll Will Stand